NOT ALL PROTEINS ARE CREATED EQUAL - Know Thy Ingredients 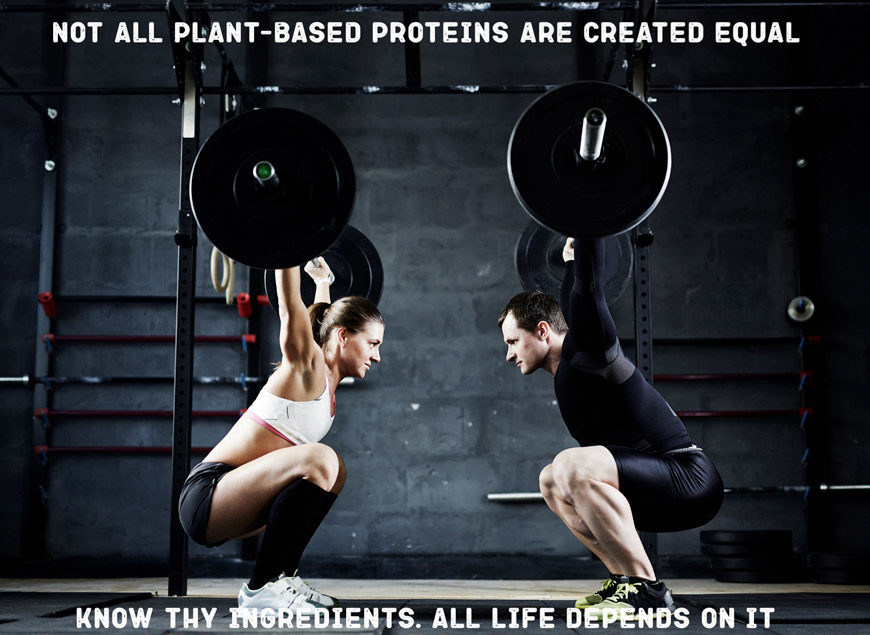 NOT ALL PROTEINS ARE CREATED EQUAL – Know Thy Ingredients

On the Subject of Manufactured vs Natural Glutamic Acid

OVERVIEW – There are a number of straightforward bold faced lies used by the glutamate and food industry in defending its contention that exposure to free glutamic acid found in processed food does not cause adverse reactions, could not possibly cause brain damage, learning disorders, or endocrine disturbances; and could not possibly be relevant to diverse diseases of the central nervous system such as addiction, stroke, epilepsy, schizophrenia, anxiety, depression, and degenerative disorders such as ALS, Parkinson’s disease, and Alzheimer’s disease.

Our health sovereignty begins by isolated these protein myths from truth.

The truth of the matter is that the glutamic acid found in unprocessed, unadulterated, and/or unfermented food and in the human body is composed of one form of a single amino acid, L-glutamic acid, and nothing more. In contrast, the glutamic acid that is freed from protein through a manufacturing process or through fermentation (i.e., processed free glutamic acid), is always accompanied by a variety of impurities and carcinogens — i.e., byproducts of manufacture.  Thus, the glutamic acid that is isolated from pea, soy, and whey protein, or yeast extract, maltodextrin and other deceptive labeling for MSG, used as a flavor enhancers or to isolate proteins in processed food is always composed of D-glutamic acid and impurities that inevitably appear during fermentation or other modes of glutamic acid manufacture or extraction processing. In addition to the inevitable production of D-glutamic acid, impurities may include, but are not limited to, pyroglutamic acid, mono and dichloro propanols, and heterocyclic amines. Mono and dichloro propanols and heterocyclic amines are know carcionogens. The consequences of the interactions of these various chemicals with other chemicals and/or with the digestive processes are unknown.

What we do know is that our bodies are organic living bio-systems that were ONLY designed to be nourished from real whole food ingredients that come directly from mama earth and our sun’s photosynthesis, free of pesticides, chemicals and other toxins.

Our bodies cannot recognize or assimilate these man-made ingredients, which puts our bodies in a stressed and highly inflammatory response.

Make no mistake. Since processed free glutamic acid (MSG) used in processed food and in plant “growth enhancers” is not identical to glutamic acid found in unprocessed, unadulterated food and in the human body, there is no reason to believe that the product called “glutamic acid” produced from these highly-processed protein extractions or by the glutamate industry will be functionally equivalent to pure L-glutamic acid.

Neuroscientists now know that these isolated proteins create excitotoxic effects that cause a number of dis-eased reactions in our bodies.

There is also the issue of amino acid balance. Metabolism of amino acids, regardless of the source from which they come, is followed by uptake of those amino acids by the body’s amino acid transport system. One might think of individual amino acids waiting at the side of a river of blood for “vehicles” that will transport them to parts of the body where they will be put to work. However, the “vehicles” on which the various amino acids are transported out of the stomach and intestines have a limited capacity. So when unusually or relatively large amounts of one or a small group of amino acids present themselves for transport, there will be competition for the available space, and not all of the amino acids will be accommodated. The possible deleterious effects of this phenomenon, including too much of one amino acid or too little of another, have been ignored by the proponents of the safety of processed free glutamic acid (MSG).

Then there is the claim that “just a little won’t hurt anyone.” Yet, in truth, a little arsenic will, over time, harm people. The peanut residue left on a knife that had been wiped “clean” with a paper towel was enough to kill a child who was allergic to peanuts. The corn starch or maltodextrin used as binders and fillers in some vitamins, minerals, and medications will cause MSG reactions in acutely MSG-sensitive people. Indeed, no study to determine the least amount of processed free glutamic acid (MSG) needed to trigger an MSG reaction in MSG-sensitive people has ever been done.

Again. Any small amounts of free glutamic acid that might be found in unprocessed, unadulterated, and/or unfermented, food will be L-glutamic acid, only, and will not typically cause adverse reactions. This should not be confused with the glutamic acid that occurs in or on food as a consequence of manufacture or fermentation, which whether you are MSG-sensitive and immediately react to the ingestion of these isolated proteins or ingredients, make no mistake these ingredients are excitotoxins and highly toxic for our bodies. The fact that there may be some unadulterated, unfermented free glutamic acid in processed food or in produce is irrelevant to the fact that the manufacturing and extraction processes of isolated proteins and flavor enhancers product free D-glutamic acid and other known carcinogens.

Glutamic acid can also be freed from protein by fermentation, enzymolysis, use of acids, or other manufacturing extraction/isolation processes, prior to ingestion.

“The word chiral, from the Greek word for hand, alludes to molecules that exist in mirror-image versions — right-handed or left-handed. Although they appear to be identical twins, chiral molecules are fundamentally different. One molecular twin cannot be substituted for the other because they are asymmetrical. The difference is comparable to asymmetry between your right and left hand: One is a mirror image of the other, but you cannot fit your right hand into a left-hand glove.”(1)

“Although it has been generally accepted that the free amino acids and proteins found in higher organisms are composed exclusively of the L-enantiomers of amino acids, the mirror image D-forms are known to be present in some naturally occurring peptide antibiotics and in the cell walls of bacteria.” (2)

“There were contrasting views expressed on the use of the various isometric forms (the natural L-form or the commercially available mixtures of DL-forms) of amino acids.” (5)

“The chemical structure of L-glutamic acid and related compounds and the chemical composition of MSG are represented in Figure 1….Two possible stereoisomeric forms of glutamic acid exist, D and L. According to Maga (1983) the L form (dextrorotary form with the L-configuration) is the predominant natural form….” (6) (7)

“Because D-amino acids are rare in higher animals…” (8)

MANUFACTURED FREE GLUTAMIC ACID (MSG) is glutamic acid that has been freed from protein through a manufacturing process or fermentation prior to ingestion, or glutamic acid that has been grown from selected bacteria that secrete glutamic acid through their cell walls.  There are over 40 ingredients in which MSG will be found. “Monosodium glutamate,” “autolyzed yeast,” and “natural flavoring” are names of some of those ingredients.  (In the first FDA classification of such ingredients, the FDA called them “monosodium glutamate and other hydrolyzed proteins.”)  The amount of free glutamic acid (MSG) that will be found in each is dependent on the method used to produce it, the protein source used (if bacterial fermentation was not used), and the extent of the processing.

“Foods contain a large assortment of xenobiotics (foreign, unnatural substances) that can have both positive and negative nutritional implications. One example is the occurrence of the uncommon D-stereoisomers of amino acids in some dietary proteins. These D-amino acids are produced from the common L-stereoisomers during food preparation and processing.” (9)

In table 1 of a research report by Rundlett and Armstrong, the authors present a list of all of the processed foods analyzed by them for L and D-glutamate (glutamic acid) content. Every one of the 38 processed foods evaluated contained D-glutamate. Three of those analyzed and found to have D-glutamate content were three brands of monosodium glutamate, including Ac’cent Flavor Enhancer, once marketed by Pet Incorporated. (10)

“The chemical hydrolysis with hydrochloric acid is efficient, but almost any organic substance in the raw material is hydrolyzed, resulting in desired reactions such as hydrolysis of proteins, carbohydrates, fats (triglycerides), and the unwanted formation of mono and dichloro propanols (MCP and DCP).” (12)

“Pyroglutamic acid…occurs as a breakdown product of glutamate that can accumulate in foods during storage and processing.” (13)

14. Expert Report of Paul M. Kuznesof, Ph.D., Chief of the Chemistry Review Branch in the Division of Product Manufacture and Use, Office of Premarket Approval, Center for Food Safety and Applied Nutrition, FDA. The Report was submitted on September 3, 1996 to the Federal Court in the Eastern District of Missouri re: Truth in Labeling Campaign, et al., vs. Shalala et al., pages 1-3.

Glutamic acid is an amino acid found in abundance in both plant and animal protein.  In humans it is a non-essential amino acid, i.e., the body is capable of producing its own glutamic acid, and is not dependent upon getting glutamic acid from ingested food.

In addition to its role as a building block of protein, glutamic acid serves as a neurotransmitter vital to the transmission of nerve impulses in many parts of the central nervous system.  Under certain circumstances, glutamic acid becomes a neurotoxin, causing neuron degeneration and cell death which may be followed by neuroendocrine disorders.

MSG fed to the very young has been shown to cause brain damage and subsequent learning, behavior, and endocrine disorders such as reproductive disorders and gross obesity.  Ingestion of MSG and the D-glutamate acids carries impurities that accompany manufactured isolated proteins and flavor enhancers by people of all ages will cause adverse neurotoxic reactions.  Eating protein (which will contain bound glutamic acid that is L-glutamic acid, only) does not cause either brain damage or adverse reactions.

Additional information, including relevant citations, can be found at:

On the Subject of Manufactured vs Natural Glutamic Acid,

Evidence of MSG-induced Human Adverse Reactions: The Human Studies, and

The Young are Particularly at Risk for Brain Damage from Ingestion of MSG:  Data

To V or Not to V, That is the Question: A Journey to Going Vegan

EXCITOTOXINS – The Deadly Taste That Kills

NOT ALL PROTEINS ARE CREATED EQUAL – Know Thy Ingredients

EXCITOTOXINS – The Deadly Taste That Kills

Home
0 Cart
Account
Menu
X
We use cookies to ensure that we give you the best experience on our website. If you continue to use this site we will assume that you are happy with it.OkNoPrivacy policy